Veteran Made Woodworks at the DCC Holiday Craft Fair

Everywhere we goooo people wanna know, who we are and where we come from! From the Poughkeepsie Journal:

Veteran Made Woodworks LLC, out of Troy, Rensselaer County, sold its American flags carefully constructed of slices of plywood.

A recruiter for the New York Army National Guard, 35-year-old founder Anthony Guadagnino started the business two years ago after he made a wooden flag as a gift for a neighbor. He had been in the middle of doing contract work on his house.

Guadagnino enlisted in the Marine Corps in 1999 and served for six years, including a tour in Iraq in 2003.

“The thing that really fuels (our company) — we get regular patriotic Americans. More than anyone,” he said. “… We do some other stuff where we get a flag from somebody who has a memorial, or I’m buying it for this person or whatever the case is.”

His wife, Jessica Guadagnino, added that the Holiday Craft Fair allowed them to see customers’ reactions.

“It’s kind of exciting to see how people like his work,” she said.

This is an excerpt of an article from the Poughkeepsie Journal. 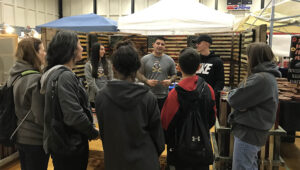 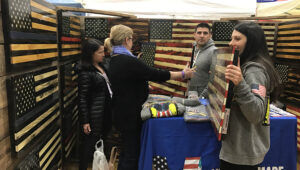 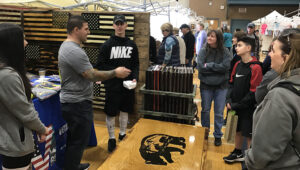